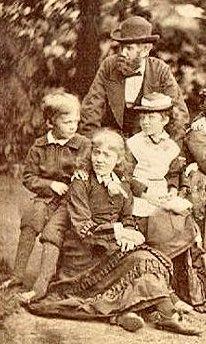 Helena Maud Kipping was the daughter of James Stanley Kipping, a senior official in the Manchester Branch of the Bank of England of which his father was the head. Her mother was Julia Kipping nee Du Val. They lived at Higher Broughton, then a rural place on the outskirts of Manchester where James Stanley Kipping owned a small farm.

Allan and Helena Norbury had the following children, all born in Manchester:

In the photograph Helena Kipping is the girl on the right hand side. Sitting in the foreground is her elder sister Emily. Her father is standing at the back. The boy on the left is her brother William Cecil Kipping. The photograph was taken in about 1875 by Thomas George Whaite.