Thomas George Whaite was born on 19 April 1834 and was baptised on 11 October 1835 at the Collegiate Church in Manchester. He was the son of Thomas Whaite 1796-1881 of Manchester and his wife Ann Dunavian (1803-1842). The father was a portrait painter but was better known for painting banners and theatrical scenery, and had painted the banners that were proudly flown at the Peterloo Massacre in Manchester on 16 August 1819.

On 16 June 1864 Thomas George Whaite married Elizabeth Ellen Du Val in Manchester Cathedral. She was the daughter of Charles Allen Du Val. Witnesses were the bride’s father and her younger sister Frances Du Val, the bridegroom’s cousin Frederick A. Whaite, and Jemima Hampton Renney (the half-sister of the bride). 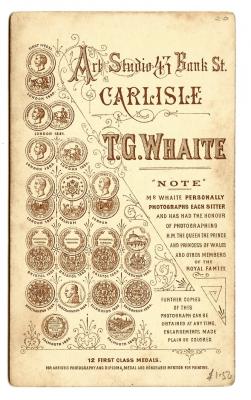 Descended from a family of talented artists, he was a photographer as well as a painter. With his brother-in-law Charles Duval, he ran the firm of C.A. Du Val & Co, but he left in 1881 and moved first to London and then to Carlisle, where he established himself in business as a photographer at 43 Bank Street.

His photographic work was of a very high quality, and he won first class medals at the exhibitions of the Photographic Society of Great Britain in 1880, 1881 and 1883, and at Bristol in 1880, 1883 and 1884. He had already achieved a medal at the exhibition of the Photographic Society of London in 1874, and won more at Falmouth in 1880, Northampton in 1884, Edinburgh in 1885 and 1886, and also in Belgium. Altogether by 1884 he had been awarded twelve first class medals for artistic photography, and a diploma and honourable mention for painting.

However his wife nee Elizabeth Ellen Du Val left the family home after 1871 and went to live at Copenhagen in Denmark with Andreas Peschcke Matthiesen Koedt. They had a son named Matthias Matthiesen.

By the time that the 1881 Census was taken, Thomas George Whaite had left C.A. Du Val & Co and moved with his children to London. They were recorded as living at Rose Villa in Hammersmith. By 1891 they were living at 6 Etterby Street in Carlisle. He was described in the Census taken in that year as a widower (wrongly), and each of the three older children as "Artist Painter".


On 17 September 1891 Thomas George Whaite emigrated to California with his three daughters and brother James Whaite, sailing from Liverpool on 17 September 1891 aboard the Allan Line ship Parisian for Montreal in Canada. His son joined them in the following year (3).

Thomas George Whaite and his wife had four children :

Lilian Whaite. She was born on 15 June 1867 and baptised on 2 May 1867 in Manchester Cathedral. She was called "Lily" within the family.

Henrietta Padmore Whaite. She was born on 20 February 1869, and baptised on 19 March 1869 in Manchester Cathedral. She was called "Netta" or "Nettie" in the family. She married Robert Spooner.

George Rene Whaite. He was born on 12 June 1872 in Manchester, and called "Rene" in the family. He emigrated to California in 1892, married Charlotte Reynolds and had a daughter. He was the Chief Artist and General Manager for Terkelson & Henry in San Francisco (4). He died on 25 July 1941 in San Francisco.

(1) Slater's Directory of Manchester and Salford 1871-72. The entry for Thomas George Whaite and his family was evidently out-of-date by the time that it was published.
(2) The Census Return taken in 1871 is the last occasion on which she appears listed with the family.
(3) A letter written in late August 1891 from Lily Whaite at 6 Ellerby Street in Carlisle says that Thomas George Whaite had retired from business there, that the family were going to California in three weeks' time sailing from Liverpool, that "Uncle Jim" was going with them, and that Rene would follow in nine months' time when he had finished at Antwerp. This letter was followed by a postcard from Lily Whaite dated 13 September 1891 reporting that they were sailing on 17 September 1891 on the liner Parisian for Montreal. H. Clarence White and Lily F. Whaite Papers GB0210 LP3/1, National Library of Wales, Aberystwyth. A letter from "Dux" (Mina Whaite) at Riverside in Califorrnia dated 20 August 1892 reported that Lilian Whaite was ill. Ibid HPB4/4.
(4) H. Clarence White and Lily F. Whaite Papers GB0210 HPB 5/6.
(5) In a letter from dated 24 June 1910 Rene Whaite in San Franciso reported that "Nettie" (his sister Henrietta Padmore Whaite) was then living with husband and a daughter in Riverside (California) and that "Dux" (their sister Mina Whaite)was also there but "will return to mother in Copenhagen in a few months". He himself had a wife and daughter by then. H. Clarence White and Lily F. Whaite Papers GB0210 HPB 4/4.