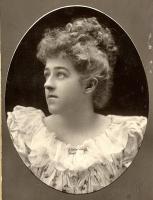 Blanche Du Val was born in 1875, the daughter of Gerald Du Val and his wife née Catherine Shimwell.

In 1900 she was married to Norman Melland, a Manchester merchant and a son of an eminent surgeon.

They had two children:

Frederick Nevill Shimwell Melland. He was born on 3 May 1904, and was called Nevill in the family, a surname in the family of his maternal Shimwell grandmother. He became engaged to Olive Primrose Haxton, daughter of Alfred and Leah Haxton in 1934 (1), but she was married to another in the following year (2). Nevill Melland married Kathleen Dearnaley in Chelsea in 1940. He died in Swansea in 1990.

In 1901 the family were living at 126 High Street in South Manchester. By the time the 1911 Census was taken they had moved to 29 Palatine Road, Withington in Manchester. The site is now part of the Christie Hospital.

Blanche Du Val had a fine singing voice, having been trained at the Royal Manchester College of Music. She performed in concerts (3) and opera, and taught singing at the college. She was a member of the College Council until she resigned in 1919 (4). She was an active member of the Halle Concerts Society (5).

She may also have had a flower named after her (6).

Blanche Melland moved to the Village House (8) at Grayshott in Hampshire, near Hindhead in Surrey. The house has been demolished and the site is called The Square.

(1) "It is announced today that Miss Olive Primrose Haxton, only child of the late Mr. Alfred and Mrs. Leah Haxton, is to be married to Mr. Nevill Melland, son of the late Mr. Norman Melland and Mrs. Blanche Melland, of Manchester. Miss Haxton's mother, who died in April of last year, was for years known as the "Queen of Diamonds", for she was a daughter of the late Mr. Barney Barnato, the diamond millionaire, who bequeathed £250,000 to her." Gloucestershire Echo 22 November 1934; Portsmouth Evening News 22 November 1934.
(2) "Pall Mall writes from London ... Heiress's Wedding. The reception after the wedding of Miss Olive Primrose Haxton, the Barnato heiress, and Mr. Fitzroy Paget Upsall Phillips, will be at Claridges. The wedding is to be at St. Mark's North Audley-street ... Mt. Phillips, who is twenty-six, is a solicitor, and is a keen sportsman. He hunts with the Puckridge. His mother's house at Standon, Herts, is one of the most interesting in the South of England. It is an old country inn that has been converted and modernised. I believe the family is at present trying to locate the old inn sign, which will be restored to its original position on the building." Gloucester Citizen 23 August 1935. A similar report appeared in the Hull Daily Mail on the same day, where the bridegroom's name was incorrectly given as "Mr Fitzroy Paget Hasall Phillips".
(3)"INTERNATIONAL BROTHERHOOD. A concert under the auspices of this society was held on Saturday night [1 July 1899], in the large drawing-room of the Social Club, Lower Mosley-street ... and consisted of ... romance, "Li, c'est un reve," Miss Blanche Duval... The songs by ... Miss Duval obtained unanimous encores ..." Manchester Courier and Lancashire General Advertiser 3 July 1899.
"The deadness of the summer months, from a musical point of view, was pleasantly interrupted by a concert at the Royal Manchester College of Music. It was given in aid of the students' sustentation fund, and should raise a fair sum of money ... a lively vocal trio from Cimarosa's "Secret Wedding", admirably sung by Miss Lillie Wormald, Mrs. Norman Melland (Miss Blanche Duval), and Miss Harriet Bolton, brought the concert to a conclusion ... all the performers being past or present students of the college." Manchester Courier and Lancashire General Advertiser 31 May 1900.
"On two evenings of last week very successful performances of "A Midsummer Night's Dream" were given at Ellerslie, Victoria Park, in aid of Princess Christian's Home for Disabled Soldiers and Sailors ... Among those who sang solos very sweetly were Mrs. Norman Melland ..." Manchester Times 1 June 1900.
(4) The History of the Royal Manchester College of Music, 1893-1972 by Michael Kennedy (1971) page 63.
(5) "The subscriptions to the Halle concerts again showed a falling off of over £1,500. This was all the more regrettable as an effort was made by the ladies, led by Lady Sheffield and Mrs. Norman Melland - to whom the committee felt greatly indebted - to increase the number of individual subscribers. The tendency to live at a greater distance from the city, rendered possible by the use of motor-cars, had a serious effect upon the attendance of those frequenting the stalls. From an artistic point of view the past season had, however, been one of unqualified success." Manchester Evening News 28 May 1914.
(6) "The annual exhibition of the Aylesbury Floral and Horticultural Society ... was held on Thursday [9 July 1891] in the Corn Exchange and the adjoining Recreation Ground ...Mr. F.B. Parrott carried off the palm for the begonias, amongst the varieties he staged being "Blanche Duval" ..." Bucks Herald 11 July 1891.
(7) "MELLAND Norman of 16 Sandileigh-avenue West Didsbury Manchester died 13 July 1933 at 24 York-place Oxford-road Manchester Probate Manchester 10 August to Frederick Nevill Shimwell Melland merchant Charles Herbert Melland consulting physician and Thomas Clifton Parkinson solicitor. Effects £90204." National Probate Calendar (Index of Wills and Administrations) 1858-1966 (1933) page 335.
(8) "A little further along [the Headley road] there was a small stone cottage inhabited by Mr. and Mrs. George Cane. It had been previously occupied by a Mr. and Mrs. Hale who built a larger-house with cement walls, which they called "The Oaks," later "Village House." This house and its large grounds have disappeared in recent years, to be replaced by "The Square." Grayshott: the Story of a Hampshire Village J.H. Smith (1978 reprinted 2002).
(9) "MELLAND Blanche of Village House Grayshott near Hindhead Surrey widow died 24 October 1957 Probate Manchester 24 February to Frederick Nevill Shimwell Melland merchant and Thomas Clifton Parkinson solicitor. Effects £5338 0s 6d." National Probate Calendar (Index of Wills and Administrations) 1858-1966 (1958) page 347.