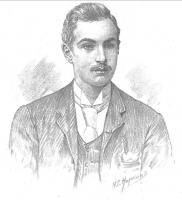 Norman Melland was born in 1865, the son of Frederick Melland and his second wife née Elizabeth Jane Middleton.

He was educated at Manchester Grammar School, Owens College (which later became part of the present University of Manchester), and in Germany (1).

In 1900 he married Blanche Du Val, the daughter of Gerald Du Val and granddaughter of Charles Allen Du Val.

His father, the Manchester surgeon Frederick Melland 1818-1911 was active in Liberal Party politics in Manchester, not least in securing Free Trade and the repeal of the Corn Laws. Charles Allen Du Val was also active in the same causes, and painted portraits of many of the leading activists. It is likely they knew each other well. They lived in the same Manchester suburb, and Blanche Du Val and Norman Melland would have been long acquainted (2).

They had two children:

Frederick Nevill Shimwell Melland. He was born on 3 May 1904, and was called Nevill in the family. He married Kathleen Dearnaley in Chelsea in 1940, and died in Swansea in 1990.

In 1901 the family were living at 126 High Street in South Manchester. By the time the 1911 Census was taken they had moved to 29 Palatine Road, Withington in Manchester. The site is now part of Christie Hospital.

Norman Melland introduced the game of lacrosse into England. From 1885 onwards he played the game for Lancashire. He was captain of the North of England lacrosse team from 1889 to 1894, and captained the England team from 1888 to 1892. He wrote two books on the game How to Play Lacrosse and Hints on Lacrosse. He also played lawn tennis and hockey for Lancashire, and was an accomplished ice skater (3).

Norman Melland was a director of the Manchester Chamber of Commerce, and Chairman of their West African Section (4). He wrote a book called Some Impressions of West Africa which was published by Bonner & Co. of London in 1923. He had trade connections with countries such as Nigeria, and travelled extensively (5). During the First World War he served in the War Trade Department, and was honoured by being made a Companion of the British Empire (6).

(1) Norman Melland also studied at "the technological branch of the Victoria University of Manchester" which later became the University of Manchester Institute of Science and Technology (UMIST) and is now (since 2004) part of The University of Manchester. There he was taught by Professor E.H. Parker. "Norman Melland joined the class late and I was told off to bring him up to date. It was purely honorific, and I only remember it because it was in Melland's house I first smoked a supremely good cigar, my pay." Memoirs of a Booklegger by Jack Kahane (2010) page 12.
(2) Charles Allen Du Val would surely have been delighted had he lived to see the Liberal party returned to government in the 1906 landslide election. That election eventually brought Herbert Asquith into power as Prime Minister. He was Blanche Du Val's brother-in-law by marriage, having married her husband's sister née Helen Kelsall Melland.
(3) Family information kindly provided by Anthony Wheal. See also the obituary of Norman Melland in The Times dated 18 July 1933. A portrait taken when Captain of Owens College Lacrosse Club was published in Black and White No. 38 dated 13 January 1888. (Copy in Bolton Archive and Local Studies Service : reference number ZZ/360/1/79.)
(4) The Times 16 November 1921.
(5) For example Norman Melland and his wife Blanche were passengers from Liverpool on board the liner "Arabic" arriving in New York on 3 August 1903 www.ellisisland.org .
(6) Manchester Evening News 8 June 1918. The report described him as being "a well-known Manchester man who gained international honours in the lacrosse world".
(7) His obituary was published in The Times on 18 July 1933.
(8) "MELLAND Norman of 16 Sandileigh-avenue West Didsbury Manchester died 13 July 1933 at 24 York-place Oxford-road Manchester Probate Manchester 10 August to Frederick Nevill Shimwell Melland merchant Charles Herbert Melland cosulting physician and Thomas Clifton Parkinson solicitor. Effects £90204." National Probate Calendar (Index of Wills and Administrations) 1858-1966 (1933) page 335; The Times on 6 September 1933.