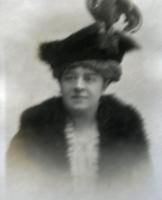 Bessie Du Val was born in 1872, the daughter of Gerald Du Val and his wife nee Catherine Shimwell.

In the 1891 census return, Bessie Du Val, aged only 18, was already described as an artist. She painted pictures and also illustrated books, including Norwegian Fairy Tales by Peter Christen Asbjornsen (1895) and Days Off (1898) by W R Credland.

In 1891 George Herbert Kipping (the son of Julia Kipping nee Du Val), aged 19 and a buyer at a shipping warehouse, was staying with the family of Gerald Du Val.

In 1896 he married his cousin Bessie Du Val.

Before the First World War George and Bessie Kipping moved to France, where they ran a club on an island in the river Seine called the "Ile des Anglais".

Bessie Kipping continued to draw and paint, and a very large pastel of hers, depicting an elderly lady holding a black-edged letter, was exhibited in Paris.

George Kipping died in 1935, and Bessie, with her daughters Dulcie and Joyce, returned to England.

She is remembered with great affection by her descendants.

Her daughter Dulcie Kipping inherited her artistic talent and painted all her life, although she is not known to have exhibited any of her work.