Florence Du Val was born on 20 July 1842, the fifth child and second daughter of Charles Allen Du Val and his wife formerly Elizabeth Renney. She was baptised on 2 September 1842 in Manchester Collegiate Church, which had become Manchester Cathedral when on 4 June 1861 she was married there to William Thomas Holland (1834-1899). He was born at Loughborough in Leicestershire in 1834.

When first married, Florence and William Holland lived in Wembdon near Bridgwater in Somerset, where William’s brother, the Reverend Thomas C. Holland was the minister at the local Unitarian chapel. Prominent among his congregation was Charles P. Browne, who was the owner of Browne & Co, manufacturer of bricks and tiles, and for whom William worked. By 1871 William Holland was himself described as a brick and tile manufacturer, and may have taken over his former employer's business. The family had by then moved to a large house on West Quay in Bridgwater called The Lions because it had large stone lions guarding the front entrance. William Holland was Mayor of Bridgwater three times from 1879 to 1882, and became an Alderman in 1880. He died on 11 December 1899 aged 65 years.

Following his death, Florence Holland moved in with her daughter Lilian and son-in-law Frederic Stanley Kipping in Nottingham and seems to have lived with them for the rest of her life. She died in 1924, aged 81.

Florence and William Holland had the following children, all born in Bridgwater (1): 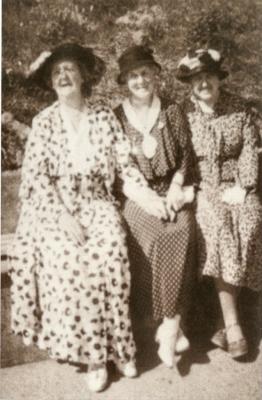 Mina Lily and Kathleen in 1934

Charles Thurstan Holland entered the medical profession and qualified in 1888 at University College in London. He became a general practioner in Liverpool, but made a great reputation as a pioneer radiologist.

All three daughters were married to eminent scientists, who became Fellows of the Royal Society. 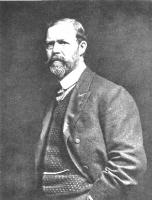 William Henry Perkin, son of Sir William Perkin and like him a renowned chemist, married Mina Holland in 1887.

With his brother-in-law he wrote the standard textbook on organic chemistry known to generations of students until at least the 1950s simply as "Perkin & Kipping".

Kathleen Holland was married in 1900 to Arthur Lapworth who became Professor of Chemistry in London.

(1) An account of the life of the Holland family is given in The Holland Sisters by E.G. Rochow and E. Krahe (2001). This is a semi-fictionalised narrative that has been adversely criticised by William Brock in Chemistry and Industry dated 1 October 2002. But despite its fictional style, the book does contains some factual information and photographs supplied by Brian Kipping, a descendant of Frederic Stanley Kipping and his wife nee Lilian Florence Holland.
(2) The Holland Sisters footnote on page 77.
(3) "HOLLAND Florence of Gittar Clumber-crescent South The Park Nottingham widow died 13 June 1924 Administration London 6 August to Charles Thurstan Holland surgeon. Effects £1300 3s. 7d." National Probate Calendar (Index of Wills and Administrations) 1858-1966 (1924) page 204.