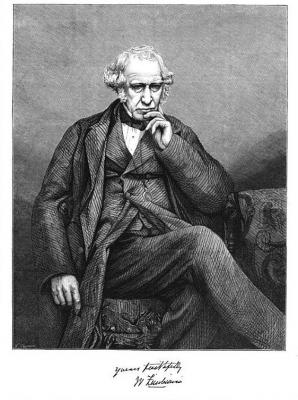 A portrait in oils of William Fairbairn was painted by Charles Allen Du Val in 1867, and exhibited at the Royal Manchester Institution and also in the Royal Academy Exhibition of 1869.

The engraving shown here is from a photograph taken by Charles Allen Du Val, made for the periodical Engineering , illustrating an article on William Fairbairn published in 1868 (1).

Sir William Fairbairn (1789-1874) was born in Kelso, Scotland the son of a humble farm worker. He showed mechanical skill at a very young age, and eventually became apprenticed to a millwright in Newcastle-upon-Tyne. After completing his apprenticeship he took on small engineering commissions, broadening his experience and continuing to study. In 1813 he moved to Manchester to work for engineers Adam Parkinson and Thomas Hewes. By 1817 he was in partnership with James Lillie, producing mill machinery and acquiring a reputation for innovation. Large contracts followed, and his reputation grew. In 1830 he became a member of the Institute of Civil Engineers.

He diversified into ship building at Millwall, where he constructed many large iron ships. He invented the Lancashire boiler and patented a riveting machine. His Manchester works produced steam boilers and engines, and he built more than a hundred bridges, including the tubular Menai Bridge in collaboration with Robert Stephenson.

From 1840 he lived at the Polygon in Ardwick, Manchester. Fairbairn wrote and lectured on historical, scientific and philosophical subjects, much of which was published. He was President of the Manchester Literary and Philosophical Society from 1855 to 1860.

He was created a baronet on 2 November 1869. A marble statue of him stands in Manchester Town Hall.

His son and heir Sir Thomas Fairbairn (1823-1891) was a major art collector. He was a commissioner of the 1851 Great Exhibition, and chairman of the Executive Committee that organised the 1857 Art Treasures Exhibition in Manchester. He was offered but declined a knighthood. He worked on later International Exhibitions. For over twenty years he laboured for a free art gallery for Manchester, which finally opened as the City Art Gallery in 1882.